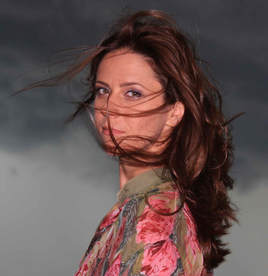 Petra Jordan, the founder of Message of the Song, is a singer-songwriter, keyboardist and producer based in the Netherlands. Her music blends pop with jazzy harmonies and soulful lyrics, often exploring philosophical and existential questions. You can find out more at petrajordanmusic.com

Petra has given her workshops and the Essential Songwriting Course at various locations, including United Pop Amsterdam, Max Guitar in The Hague, and Abbey Road Institute in Amsterdam, where she is invited back regularly as a guest teacher. For more info, go to  Testimonials.

Originally from Slovakia, Petra started her musical career by studying classical piano (6 years) and she has been writing her own songs since the age of 15. She studied jazz piano with a Belgian composer Hans Lamal (a former student of Chick Corea) and voice with Nancy Meijer (using EVTS technique). She co-produced her debut album “The Other Side” with Bai Kamara Jr., a well established Sierra Leone singer/songwriter and producer in Brussels, Belgium and Thijs Cuppen, a Dutch jazz pianist and composer based in Amsterdam, Netherlands.

In addition to her continuous songwriting output, in September 2017, Petra was selected to take part of the “It All Starts With A Song” songwriting retreat in California, lead by Judy Stakee (a music publisher and the artist development legend behind Cheryl Crow, Gavin DeGraw and Katy Perry) . In 2016, she received a certificate for completing the “Songwriting: “Writing the Lyrics” course with Pat Pattison (former professor of John Mayer) from Berklee Online and continues to study and participate in workshops herself (e.g. Vocal Kitchen (JLo, David Guetta, AVICII, Tiesto, Martin Garrix, Lost Frequencies)).

As a part of her university studies (M.A. in British and American Studies), she took classes in creative writing and various philological disciplines (including British and American Literature, morphology, lexicology, stylistics…) which add to her understanding of the use of language.

Having discovered the benefits of yoga and meditation, Petra brings the understanding of the importance of awareness into her songwriting, as well as into her workshops. Her curious and questioning mind has lead her to explore the creative power of sound, cymatics, quantum physics and Eastern philosophy as a way of understanding the nature of human consciousness.